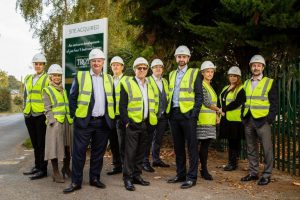 For the most part, local authorities’ planning departments and developers are on the same side – they both want to provide a good stock of well-built homes that meet the area’s housing demands, in an acceptable timeframe. However, most authorities’ planning departments have been pared back so much that they have insufficient resources to handle the quantity of planning applications as well as planning condition clearances required to ensure a growing housing market. These delays are especially impacting on smaller sites affecting the SME developers.

Richard Werth, CEO of Troy Homes, explains: “We are being asked by Government to speed up the process from acquiring land through to completion. We would be extremely happy to do this, but the lengthy delays in the planning process are holding us back. It is ironic that, just when the Government has committed to building hundreds of thousands of new homes, the resources in most authorities’ planning departments have been cut so radically that it can take a year from outline consent to detailed planning permission and clearance of planning conditions, which makes these national targets little more than pipe dream.”

The Government is aware that they need to improve the performance of Local Authorities planning departments but have to date not done anything meaningful. Sajid Javid will need to make real changes and quickly.

The temptation for planning departments is to focus on the volume developers’ larger applications and satisfy their new homes targets with these large developments. As a result, the SME housebuilders’ applications for smaller developments slip down the priority list so the housing landscape will be dominated by large developments with uniform properties and buyers lose out on their choice of size, price, quality, architectural variety and location.

Such are the delays now for SME developers that they frequently have to resort to the appeals process in order to expedite their planning permissions. This means that planning departments have to spend time handling the appeals caused by lack of resources which exacerbate the problems by slowing down other applications in their caseloads. No-one wins.

Richard adds: “This isn’t a case of planning departments being inefficient – they are simply overloaded and under resourced. However, there is a desire by planners and developers to improve the current impasse.I think I speak for most SME developers when I say that we would be willing to pay more, if it would guarantee a better service through improving the planning departments.

“We currently pay for pre-planning meetings, which are very helpful, but the planning officer’s report from these meetings can take weeks to come through. If the meetings and reports could happen quicker then it would encourage pre-planning discussions which should reduce the number of poorer applications. Also, if there could be a better fast track system when, for example, developers have followed pre-planning advice or done an extensive public consultation and their proposals have a consensus of residents’, then approval should happen sooner. In contrast, sub-standard or poor schemes could be rejected with quicker, simpler processes and possibly subject to higher charges for re-submission. These kinds of changes would mean that developers will only submit applications that are well designed, have public support, meet the demands of the local market and are likely to succeed, which should improve their progress through the planning process.

“There is mutual trust and respect between most SME developers and local planning officers and we all want to improve this ailing system. But, we also need commitment from national and local budgets for better resourced planning departments if we are to speed up the delivery of the new homes that the market so desperately needs.”